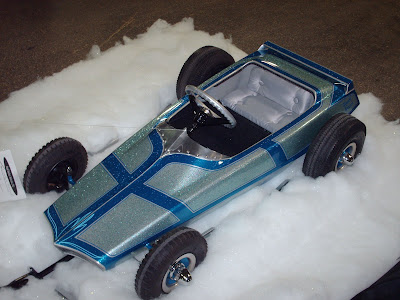 My two-year old son thought his little pull car was pretty kool. If a guy had a fiberglass body, this think would be pretty easy to make. 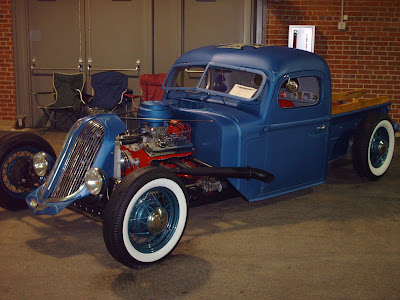 I took several pictures of this flat blue pickup truck at the Road Rocket Rumble last summer. Dull-gonnit if I ain't lookin' forward to this year's event! Ol' Scruffy is going to try to get the '50 done there this year. 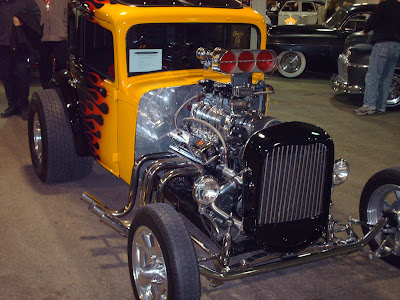 This little Bantam was pretty sweet. I can't even imagine what it's like to get behind the wheel and push the accelerator in this one! 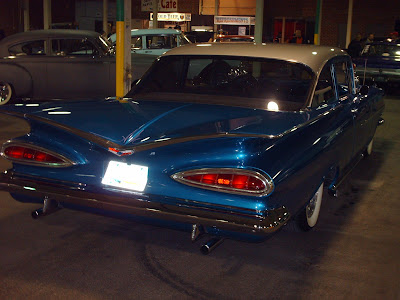 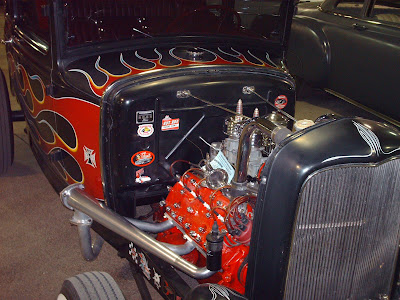 Hey daddio! Thanks for checking out Suede and Chrome! Your comments are greatly appreciated! 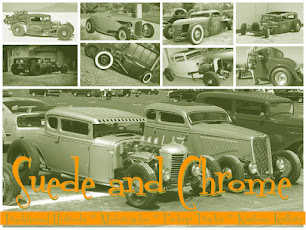 What is Suede and Chrome?

Support these friends of Suede and Chrome:

Call Taz for Your Custom Art and Pinstriping Needs

Call Jim for a Chrome-plating quote 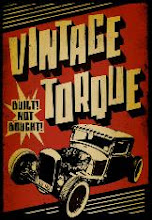 SOLE SURVIVOR by Pistol Pete Midtgard (The Twistin' Tarantulas)Sometimes late at night, when I'm lyin' in my bed, I just can't sleep a wink I finally get back up, put all my clothes back on, get in my car and drive so I can think Then I drive around this town I still call my stomping grounds
And always end up rollin' through the place where I grew up

Chorus:
Now as I guide my sled through my old neighborhood, like a ghost on a haunting...
I think of all my friends, from way back then, and I wonder where they've gone
And I remember how we laughed and fought and drank and cried and carried on
I wonder who got straight, who's locked up, and who flung the curtain down
I'm still around

We were so young, but already cynical and tired
Of how predictable, how ridiculous our friends had all become
We had no plan but to spite the world, it was such a stagnant place
The conglomerates had changed, but the song remained the same
So we dressed in dead men's clothes and shoes with stiletto toes
Played cheap guitars through ragged amps and made fun of it all

Now it's been twenty years since I first stepped on a stage
I got a Ph.D. from the hard knocks school in adolescent rage
With deafened ears, and a hardened heart, tattoos all green and blurred
I'm a battered tomcat in the alley of life, and I still want my song to be heard
And it seems to me after all these years, that I'm the sole survivor
It seems to me everybody's gone and I'm all alone

Now as I guide my sled through my old neighborhood, like a ghost on a haunting...
I think of all my friends, from way back then, and I wonder where they've gone
And I remember how we laughed and fought and drank and cried and carried on
I wish I knew then what I know now, but youth is wasted on the young
And we were so young. 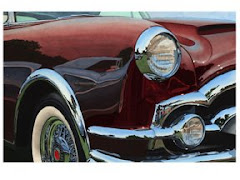 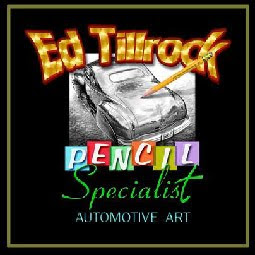 Who Could Really Love This Car But Me? - Brian Setzer

Promote Your Page Too

Is Anyone Reading This Blog Right Now? 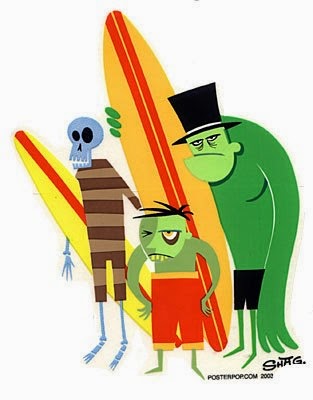 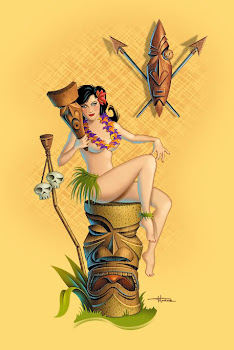 "59 by Brian Setzer and "68 Comeback Special 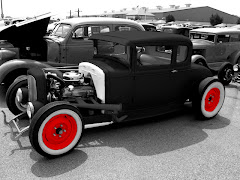 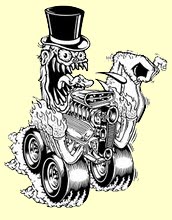 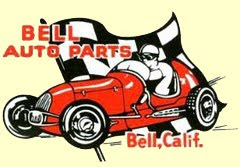 What is Suede and Chrome?

Donate to Suede and Chrome 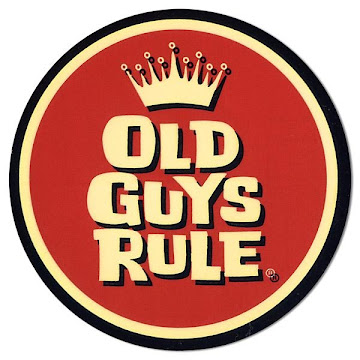 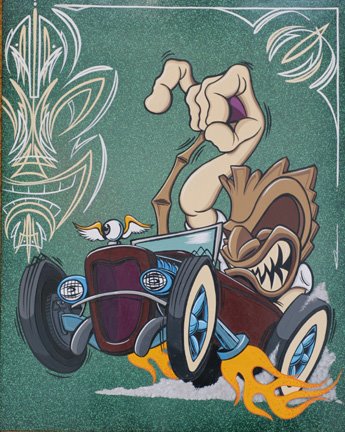 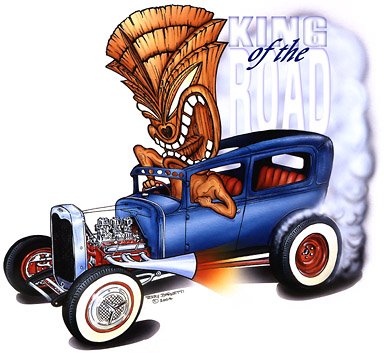 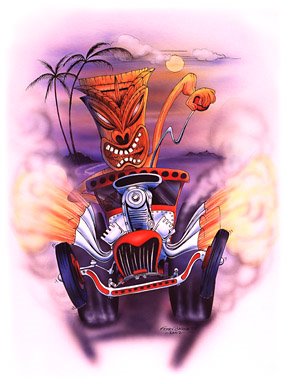 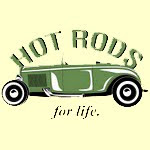 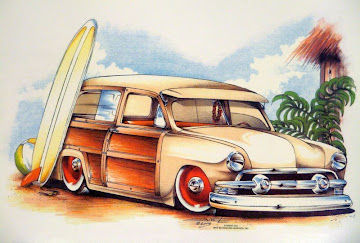 Kustom Kulture is a US neologism used to describe the artwork, the vehicles, the hairstyles, and the fashions of those who drove and built custom cars and motorcycles in the United States of America from the 1950s through today. In the early days of hot rodding, many fashions and styles developed. Over time, each of these distinct styles of customizing have blended and reshaped our everyday life. Artists such as Von Dutch (Kenny Howard), custom car builders such as Ed "Big Daddy" Roth, hot rod and lowrider customizers such as the Barris Brothers, along with numerous tattoo artists, automobile painters, and movies and television shows such as American Graffiti, Happy Days, The Munsters (The Munster Koach, Drag-u-la) and The Monkees (The Monkeemobile) have all helped to form what is known as Kustom Kulture.
Kustom Kulture is usually identified with the greasers of the 1950s, the drag racers of the 1960s, and the lowriders of the 1970s. Other subcultures that have had an influence on Kustom Kulture are the Skinheads, mods and rockers of the 1960s, the punk rockers of the 1970s, the metal and rockabilly music, along with the scooterboys of the 1980s, and psychobilly of the 1990s. Each separate culture has added their own customizations to the cars, their own fashions, influenced the music, and added their own ideas of what is cool, of what is acceptable, and what is not. Everything from wild pinstriped paintjobs, to choptop Mercurys, to custom Harley-Davidson and Triumph Motorcycles, to metalflake and black primer paintjobs, along with music, cartoons, and monster movies have had an impact on what defines anyone and anything who is part of this automobile subculture.
In the 1990s and 2000s, Kustom Kulture had taken on a rebirth of American subcultures from the 50's and 60's with DIY activities. Each style is distinct, and has its roots in American automobile history. Many styles that would not have tolerated each other in the past now come together in large car shows.

One Piece At A Time - Johnny Cash

Well, I left Kentucky back in '49
An' went to Detroit workin' on a 'sembly line
The first year they had me puttin' wheels on cadillacs
Every day I'd watch them beauties roll by
And sometimes I'd hang my head and cry
'Cause I always wanted me one that was long and black.
One day I devised myself a plan
That should be the envy of most any man
I'd sneak it out of there in a lunchbox in my hand
Now gettin' caught meant gettin' fired
But I figured I'd have it all by the time I retired
I'd have me a car worth at least a hundred grand.

I'd get it one piece at a time
And it wouldn't cost me a dime
You'll know it's me when I come through your town
I'm gonna ride around in style
I'm gonna drive everybody wild
'Cause I'll have the only one there is a round.

So the very next day when I punched in
With my big lunchbox and with help from my friends
I left that day with a lunch box full of gears
Now, I never considered myself a thief
GM wouldn't miss just one little piece
Especially if I strung it out over several years.
The first day I got me a fuel pump
And the next day I got me an engine and a trunk
Then I got me a transmission and all of the chrome
The little things I could get in my big lunchbox
Like nuts, an' bolts, and all four shocks
But the big stuff we snuck out in my buddy's mobile home.
Now, up to now my plan went all right
'Til we tried to put it all together one night
And that's when we noticed that something was definitely wrong.
The transmission was a '53
And the motor turned out to be a '73
And when we tried to put in the bolts all the holes were gone.
So we drilled it out so that it would fit
And with a little bit of help with an adaptor kit
We had that engine runnin' just like a song
Now the headlight' was another sight
We had two on the left and one on the right
But when we pulled out the switch all three of 'em come on.
The back end looked kinda funny too
But we put it together and when we got thru
Well, that's when we noticed that we only had one tail-fin
About that time my wife walked out
And I could see in her eyes that she had her doubts
But she opened the door and said "Honey, take me for a spin."
So we drove up town just to get the tags
And I headed her right on down main drag
I could hear everybody laughin' for blocks around
But up there at the court house they didn't laugh
'Cause to type it up it took the whole staff
And when they got through the title weighed sixty pounds.

I got it one piece at a time
And it didn't cost me a dime
You'll know it's me when I come through your town
I'm gonna ride around in style
I'm gonna drive everybody wild
'Cause I'll have the only one there is around. 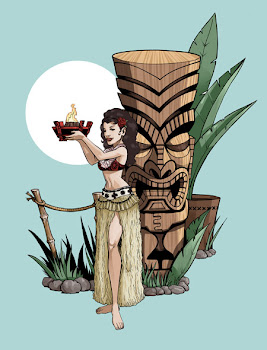 My Custom Machine by the Beach Boys 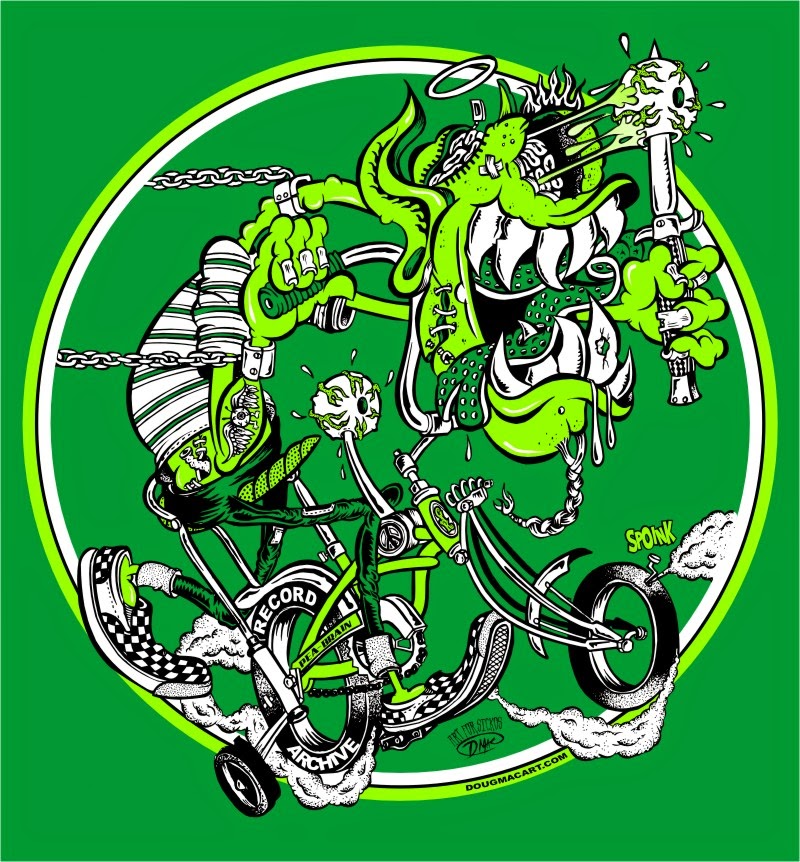 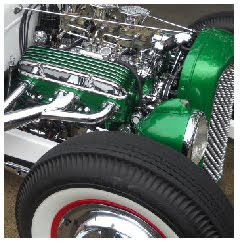 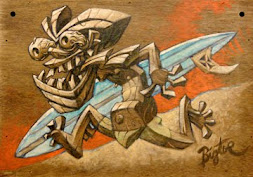 Well there she sits buddy just a-gleaming in the sun.
There to greet a working man when his day is done.
I'm gonna pack my Pa and I'm gonna pack my aunt. I
'm gonna take them down to the Cadillac Ranch.
Eldorado fins, whitewalls and skirts.
Rides just like a little bit of heaven here on earth.
Well buddy when I die, throw my body in the back.
And drive me to the junkyard in my Cadillac.
Cadillac, Cadillac, Long and dark, shiny and black.
Open up your engines let `em roar.
Tearing up the highway like a big old dinosaur.
James Dean in that mercury `49.
Junior Johnson runnin' through the woods of Caroline.
Even Burt Reynolds in that black Trans Am,
all gonna meet down at the Cadillac Ranch.

THANKS TO MUSTANG MIKE FROM MIKE'S SHOW-N-SHINE FOR AWARDING SUEDE AND CHROME THIS COVETED AWARD.

Well I went out a cattin’ on a Friday night
I was dressed to kill, I wasn’t lookin’ for a fight.
I looked in the mirror, just a waitin’ for the light,
I saw a hot chick that really looked right.

Well I pulled on over, she asked me for a ride,
She moved real close, side by side.
I looked out the window and to my surprise,
It was a hot rod Ford just a passin’ me by.

I’m draggin’, draggin’ down main once more,
With a peroxide blonde in a hopped up Model Ford.

Well we drove down Main, just to make a scene.
I barked my tire when the light turned green.
I slapped it to the floor, let out on the clutch.
What was left on the road, well it wasn’t very much.
We flew out of town, we were side by side,
Twin carburetors were open wide.
Tires that smoked, engine started to whine
I tell ya, that blonde left me way behind.